Lessons from the SpaceX Launch 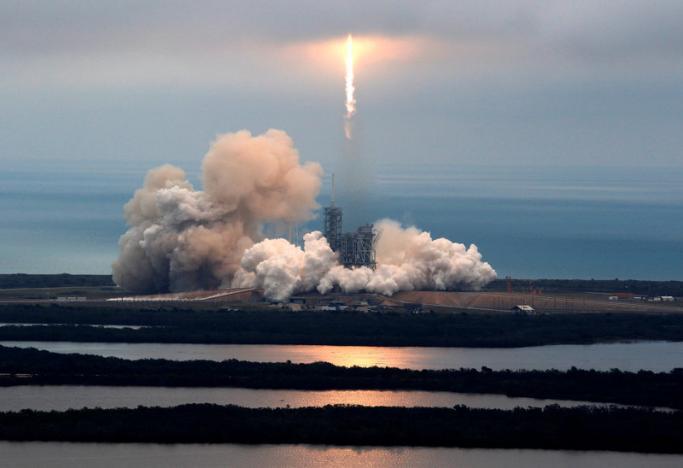 We watched the SpaceX launch this weekend, 1) because we are consummate nerds; and 2) Science Guy’s lab sent some transgenic seeds to the International Space Station via the Dragon spacecraft, so it was kind of like a little part of us was going into space too. (In an indirect way probably only felt and understood by…emotionally driven nerds…like me.)

Being an excellent nerdy mother, I put off my child’s morning nap on Saturday so we could watch the launch together at 10 am. We piled onto the couch and watched as the countdown clock ticked down from 5 minutes to 1 minute to 30 seconds to 15 seconds…and then stopped at T-minus 13. We waited…and waited…and waited…then sighed in disappointment as they scrubbed the launch for the day because of an abundance of caution regarding some technical doodlydoo. (If only superintendents were so cautious about snow days!)

The next day’s launch attempt was scheduled for 9:35am, so after  kindly letting Monkey sleep in a bit Sunday morning, we repeated our routine the day before. 5 minutes…1 minute…30 seconds…15 seconds…10…9…8…7…6…5…4…3…2…1…lift off! Monkey happily cheered on the triumph of science with us and then promptly took a long nap. It was a good day.

The day before the first launch attempt I’d had a fun conversation over on my Instagram about various jobs people have held over the years. It seems like a lot of people have gone through the job wringer in the last 5-10 years, and I’m not talking about temporary high school or summer jobs…these are college graduates with “practical” majors who have still had to run the employment gamut to where they are now. (Hooray for graduating during the recession MAKE AMERICA GR…oops, too soon?) My pal Fay over at Balancing Lemons said she’s never been fully satisfied with any of her jobs and is ready for the next stage, but feels like society frowns on exploring and learning for the sake of exploring and learning.

I was ruminating on that conversation when I saw the SpaceX launch and had an epiphany: it’s okay to say stop. We’re told that we have to keep going, to stick things out, to not turn back, to do whatever it takes to build equity and our bank accounts, but what’s the point if that’s not where you want to go? Now I’m sure terminating the first launch was not an easy call and probably involved a lot of engineers running around and yelling, but if a FRICKIN SPACESHIP LAUNCH that probably costs BILLIONS of dollars can be stopped ten seconds before liftoff, why the hell can’t someone say stop to the job, relationship, lifestyle expectation, hobby, or habit that’s killing their soul, or just cramping their style?

Now the Falcon 9 eventually launched on Sunday and that’s fantastic. But SpaceX also literally blew up a rocket four months ago. So the other lesson from the SpaceX launch is an old one: if at first you don’t succeed, try, try again. Or, if you feel so inclined…scrap the mission and do something else. I think we fall into the trap of feeding security out of habit and under pressure from other people’s expectations. And there’s also plain old inertia…it’s easier to keep moving in the same direction – even if it’s not where we want to go – than it is to change directions. (Someone smarter than me could explain the vector physics of this, but I am not that person.) I’m not saying everyone should quit their jobs and become vagabond macrame artists. But it’s okay to say, hey, I don’t need this giant house that requires working overtime to pay the mortgage, or hey, I don’t need this relationship that takes more than it gives, or hey, maybe I don’t need to keep this job I hate to pay the bills if I can drastically reduce my bills.

I’m getting ready for my own big launch soon. I’ve already said, “STOP I’M NOT READYYYY!” a few times, but it’s close. And I’m able to launch this thing because I said Stop to some other things: fear of the unknown, inertia, addiction to security. (And Facebook, hah.) What things do you want to stop so you can launch the things you want?

Get launch updates by subscribing to my newsletter below.